How well are law enforcement officers equipped for interactions with youth? This was just one of several questions about police and youth interactions that was addressed by Lisa Thurau, the Executive Director of Strategies for Youth (SFY), in her talk titled “From Strategies to Solutions – Cleveland’s Evolving Story of Improving Youth & Police Interactions.” Thurau highlighted multiple efforts that have been undertaken with Cleveland partners to make systemic improvements in how police officers engage with children since the fatal police shooting of 12-year-old Tamir Rice and the subsequent consent decree between the U.S. Department of Justice and the Cleveland Division of Police (CDP). 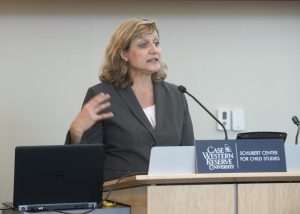 Thurau began by highlighting the lack of training and oversight that police nationwide receive in regards to interactions with young people. Generally, officers are not trained on juvenile justice related topics such as teen brain development, implicit bias, trauma, behavioral health issues, alternatives to arrest, and relevant Supreme Court caselaw and policy. Thurau also noted the lack of oversight at the state level. Across the nation almost all states lack standards and statutes guiding how police should interact with youth. This lack of policy and oversight makes police reform hard to do. One of the biggest issues that the police have to deal with is the fact that they have become “first social responders” who are asked to help with social policy challenges including: mental health issues, poverty, domestic violence, drugs and alcohol, community violence, and a fear of young people.

This lack of training and oversight has consequences for police and youth interactions. According to national data cited by Thurau, 30% of police contacts with youth aged 16-19 involve force. Frequent aggressive interactions with the police can lead youth to have less trust of law enforcement, less anticipated guilt about misbehavior and higher levels of delinquency. 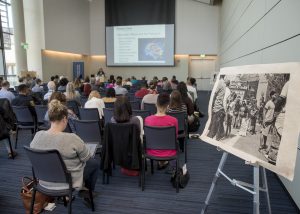 SFY was invited by the CPD leadership to help the department improve their interactions with Cleveland’s youth. SFY has provided trainings on the needs of youth in police and youth interactions. These trainings highlight the developmental factors that influence how and why children and teens act in the ways they do, and why adult criminal justice system approaches do not work well for young people. These police trainings continue in partnership with CDP and faculty from the CWRU Begun Center for Violence Prevention and the Schubert Center. SFY also brought the “Juvenile Justice Jeopardy” game to Cleveland to help educate youth about the legal system and strategies for improving their interactions with police. 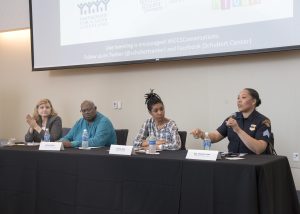 Joining Thurau were three community respondents to discuss other current efforts around Cleveland to improve police and youth interactions. Sergeant Charmin Leon from the Cleveland Division of Police (CDP), is one of the trainers for the SFY training; Leon spoke about her desire to bring about change from inside the CDP and Chief Williams’ commitment to improving interactions with youth. Michael Walker, Executive Director of Partnership for a Safer Cleveland (PSC), stressed the need to provide ongoing opportunities for police and youth to interact and the need to create partnerships to have hope for a better future. PSC has a police assisted referral (PAR) program that trains officers how to recognize, identify and refer community members to counseling and other services. Amanda King, founder of Shooting Without Bullets (SWB) and member of the Community Police Commission, described how SWB uses youth photovoice to help teens express themselves, using photography and the arts to process racial injustice and police encounters. More about this work is detailed in a brief released at the talk.

The Schubert Center for Child Studies (SCCS) has also contributed to the conversation in Cleveland around police and youth interactions. Highlighting the vulnerabilities of children and youth in the consent decree process, SCCS with several faculty associates submitted a letter to local, state and federal level policymakers concerning the importance of an adolescent development- and trauma-informed approach to police-youth interactions. This work helped inform the adoption of new CDP crisis intervention policies that recognize the unique developmental needs of children and youth. SCCS also worked to create opportunities for youth voice to be a part of improving police-youth interactions, including publishing a Citizen’s Guide to the Consent Decree that is geared toward helping young people better understand how they can become involved in the police reform process. Recognizing the importance of having policies and guidance for police officers that support developmentally and age-appropriate procedures, SCCS coordinated a group of local youth experts, working with SFY to draft a comprehensive “youth interactions” policy for CDP. SFY and SCCS continue to work with the CDP toward the adoption of this policy.

View all photos from this event.

Previous
Next
Scroll To Top